Where is Democracy taking People to ?

“Yet there are men who take (to obey, to follow laws and commands and to worship) others besides Allah, as equal (with Allah): They love them as they should love Allah. But those of Faith are overflowing in their love for Allah. If only the unrighteous could see, behold, they would see the penalty: that to Allah belongs all power, and Allah will strongly enforce the penalty. Then would those who are followed clear themselves of those who follow (them): They would see the penalty, and all relations between them would be cut off” (Al Quran Sura 2 Bakara : Ayat-165, 166).

Peace be upon all of you!

Accepting and Supporting Democracy, where is the mankind going? and Where is Democracy taking People to ? Nowadays people all over the world are vowing for democracy and there’s a lot going on to establish this worldwide whereas the complete code of life- Islam, given by the only Robb Allah- the Almighty, the creator and the only one to possess the sovereignty, legislative power of the whole universe, is present.

On the other hand Democracy is a man-made system, which along with other man-made systems, replaces the sovereignty of Allah with human authority in case of ruling the state and governing the nation and thus allows to replace the laws and commands of Allah with the man made ones which is, in fact, the top most Kufor and Shirk with Allah and it destroys all the good deeds like Salat, Siyam, Zakat, Hajj and other welfare activities- which ultimately paves the way to Jahannam.

We’re the best among the creations as represantatives of Allah and we live on food, air, water etc and we work, we think, we talk, we see, we hear, we desire and we prosper in our respectives professional lives due to the blessings of Allah. Isn’t it wise and ethical to obey Him and act as His represantatives?-trying to establish Islam in the state following his laws and commands. As Allah is our creator, owner and the only Rabb (Lord), we must follow and obey all his laws and commands for a peaceful life here and in the hereafter. We can think a little about this tiny example- if someone drinks a glass of poisoned milk-ignorantly, will the poison not kill him? Of course it will. The Shirk we commit by following Democracy and all other man-made systems and accepting human sovereignty is that poison in our glass of milk and it is silenty killing our good deeds and making our permanent address in the Hell. Alas! we are not aware of this.

Instead  of accepting Allah as the Robb and obeying His laws and commands, if we accept and follow those of human, it will be a devastating shirk with Allah and severely harmful to us. we should never forget that we are the representatives in the world of Allah and we should always obey His laws and commands in our all walks of life and make ignorant people aware of their actual position and what they should be doing and most importantly try to establish Islam in the state. Man has no right to claim sovereignty as this supreme power needs immortal and permanent existence. Immortality and permanent existence belong only to Allah and so Sovereignty should also belong to Him, so does the legislative power of the whole universe. So false clamation of sovereignty is indeed the top most Shirk with Allah.

Disobeyance of Allah has put us in a battle against him which is never possible to win. In the present world, not ‘Islam’ but democracy and other minor man made systems are established all around the world for governing the nation and so to speak, they are all Shirk. Those who are believers, must try to establish Islam in the state by spending their time and wealth in the way shown by the prophet Hazrat Muhammad (PBUH) in the light of the verses Sura 61 As soff: 9 to 13  for better, peaceful and corruption-free life here and  heaven in the hereafter. In sha Allah, only then Allah will hand the authority of the state to the believers as He promised in Sura 24 An Noor: 55. Unless these, nobody will avail Allah’s forgiveness and access to Jannat. Also see sura 46 Ahkaf : 13-14.

Most impportantly, explosions, bombings, and democratic elections are not the way of establishing Islam, as they were not shown by Hazrat Muhammad (PBUH).

By the grace of Almighty Allah, the leader and Amir of Islami Somaj, Hazrat Sayed Humayun Kabir is trying his best to establish Islam in the society and the state by his honest leadership in the light of the verses of Sura 61 As Soff: 10 and 11. He has denied the sovereingty of human. He believes that man is only servant and representative of Allah in the universe and also believes that to only Allah, the creator of the whole universe, belongs the sovereignty and the legislation power of the world and no limitations to His power as mentioned in sura An am: 102, sura Ale Imran: 193, sura Hadid: 8. And this, indeed, is the right way of establishing Islam.

So everybody, seeking welfare and peace both in here and the hereafter, should come and join the discussion to know about “Iman, Islam and Shirk, Kufor”, guided by the  Light of Al Qur’an and Sunnah and engage himself immediately with “Islami Somaj” and support by contributing with his wealth and time which is the Rightful Path to establish `Islam’ in the State shown by the Prophet and Massenger of Allah Muhammad (swm) and it is the only way to Allah’s forgivness and access into the Jannat (Heaven).

Best wishes to everybody and hope that by declaring `Rabbunallah’- Allah is only our only Rob as sura Ahkaf: 13 & 14,  you accept and safe guard your `Iman’ and protect it from Shirk- Democracy and all other Men made systems; and try your level best to establish `Islam’ by contributing with your Wealth and Time and thus run on the way of Jannat (Heaven).

Best wishes and happiness to all, 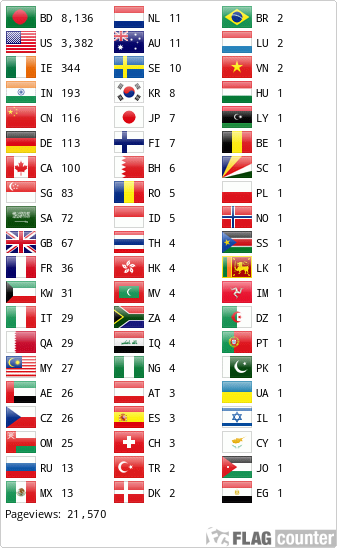